Shorty or Half-Tail, as celebrity Bush Chef Justin Bonello named “our” GPS collared Leopard, is dead. Shorty was said to be shot by one of my neighbouring farmers near Rooihoogte pass after he caught him in a trap set to protect his flock of sheep. 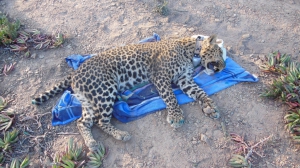 It saddens me to know that we are still so far from looking after, rather than destroying Mother Nature – especially us, which live and work daily in these mountains, one would think, we are way more connected with its beauty and fine balance.

Sadly we are all guilty of the killing of Shorty! Guilty for thinking that everyone is on the same track, has the same understanding and care. Guilty for lack of communication – especially with surveys like these that span over several landowners farms, some with very different objectives, views and back grounds. Guilty for buying lamb chops ignorantly, without asking how it came about, to be wrapped so neatly in shiny plastic and displayed on a cooling shelf. Guilty for doing the final dirty deed, thinking it’s in the best interest of one’s produce. 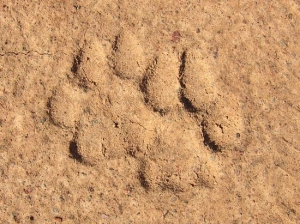 Maybe it’s time for “Leopard Friendly Lamb Chops” labels, giving farmers an incentive to look after the last of the wild “Big 5’s” in the Western Cape?

Shorty was one of 41 leopards identified by Landmark Foundation during their survey over the last 2 years in the Koo-Robertson-Greyton area. He was the only GPS collard leopard of the Langeberg delivering a staggering tracking data from just one and only down-load.

Over these 47days he covered a range of up to 300 km2 throughout the Koo Valley, from Keeromsberg in the West to the Eendracht farm on the other side of the R318 in the East, From Naudesberg in the South to Middleberg farm in the North.

Also notable was his half a tail, which was an old wound that he probably suffered during a territorial fight with another leopard.

…When the stars threw down their spears,
And water’d heaven with their tears,
Did He smile His work to see?
Did He who made the lamb make thee?

…and in the borrowed words of Landmark Foundation: A luta Continua!